The global fluids and lubricants market was valued at USD over 1,800 Million in 2022 and is expected to reach USD about 4,950 Million in 2028, with a CAGR of nearly 19% during the forecast period. The increasing need for Anti-Corrosion Properties in Electric Vehicle Batteries is projected to drive market growth. Metal and its elements are a crucial part of the formation of electric vehicle battery systems. As these metals are unstable, they tend to react with their environment to create a more chemically stable form such as oxide, hydroxide, and sulfide, among others, through the process of corrosion. Corrosion also occurs due to the interaction between electrolytes and electrodes in a battery cell. Due to corrosion, these batteries lose their capacity to hold their charge or take longer periods for charging. Corrosion in batteries also affects the aluminum current collector. To overcome this problem the demand for anti-corrosion fluid is increasing in electric vehicles and further influencing the market growth during the forecast period. 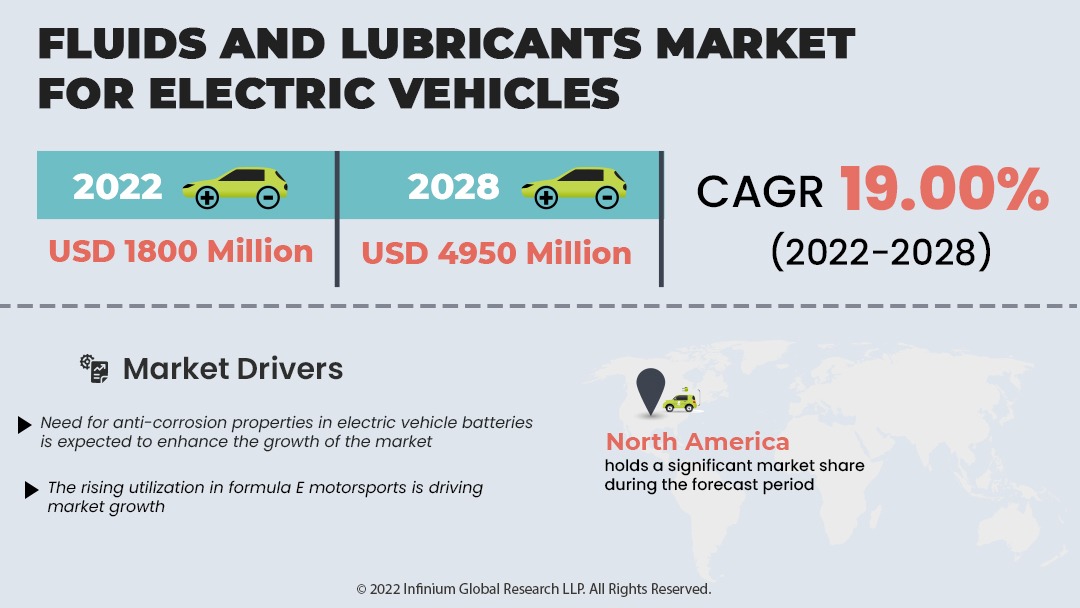 The increasing application areas for new fluids in electric vehicles have led to the surging demand for various types of coolants and lubricants. Automotive OEMs have partnered with various fluid providers for sourcing fluids for their electric vehicles to improve the driving experience, which in turn, can increase electric vehicle sales. Moreover, huge investments in the form of subsidies and infrastructure development by government and federal agencies to promote electric vehicles to cut down carbon dioxide emissions are further propelling the growth of electric vehicle fluids. However, certain technical challenges, such as higher costs and the viability of developing immersion cooling battery systems are restraining the growth of the global fluids and lubricants market for electric vehicles. As these fluids have different properties such as being dielectric, increased heat capacity, higher density, and increased viscosity, among others, as compared to conventional fluids being utilized for internal combustion engine vehicles, they are estimated to be more expensive. This factor would incur additional costs to the already price-sensitive electric vehicle models.

On the basis of region, the fluids and lubricants market for Electric Vehicles is diversified into North America, Europe, Asia Pacific, and South America region. North America holds a significant market share during the forecast period. North America is home to various OEMs, battery, and motor manufacturers such as Tesla Motors, Toyota Motor Company, General Motors Company, Magna International Inc., and LG Chem. These companies are proactive in the electric vehicle segment and are constantly improvising to upgrade their technologies to cater to EV needs and requirements. This has served as a significant factor in attracting lubricant manufacturers to invest in their R&D to come up with specialty fluids for electric vehicles. The Asia Pacific is the fastest-growing region in the market during the forecast period. Government regulations, technological advancements, extensive investments for dedicated R&D facilities, and the presence of major EV manufacturing companies are some of the major drivers that are propelling the growth of the market in the region.

The report provides deep insights into demand forecasts, market trends, and micro and macro indicators. In addition, this report provides insights into the factors that are driving and restraining the growth in this market. Moreover, The IGR-Growth Matrix analysis given in the report brings insight into the investment areas that existing or new market players can consider. The report provides insights into the market using analytical tools such as Porter's five forces analysis and DRO analysis of the fluids and lubricants market for electric vehicles. Moreover, the study highlights current market trends and provides forecasts from 2022-2028. We also have highlighted future trends in the market that will affect the demand during the forecast period. Moreover, the competitive analysis given in each regional market brings insight into the market share of the leading players.