The global agriculture drones and robots market was valued at around USD 13 billion in 2022 and is expected to reach USD over 40 billion in 2028, with a CAGR of over 22% during the forecast period. The market growth is highly impacted by the adoption of sustainable farming practices coupled with the lack of manual labor in developed countries. Asian countries such as China, South Korea, and India are projected to witness significant growth in the adoption of agriculture drones and robots in the coming years due to rising food demand in these countries. However, the majority of the market is led by European countries where the adoption of robotics in farming operations is well established on a large scale. Agriculture drones and robots offer multiple benefits over conventional farming equipment, which is another factor driving the demand for these products in the agriculture industry. Furthermore, the adoption of the agricultural drone can increase crop yields, save time, reduce expenses and act with unparalleled accuracy and precision. Additionally, the current concern over the spread of coronavirus is also expected to have a positive impact on the agricultural drone market. Robots automate manual tasks and increase the pace of farming activities, and hence can increase crop yield. As a result, agriculture robots are expected to gain more demand in the upcoming period. 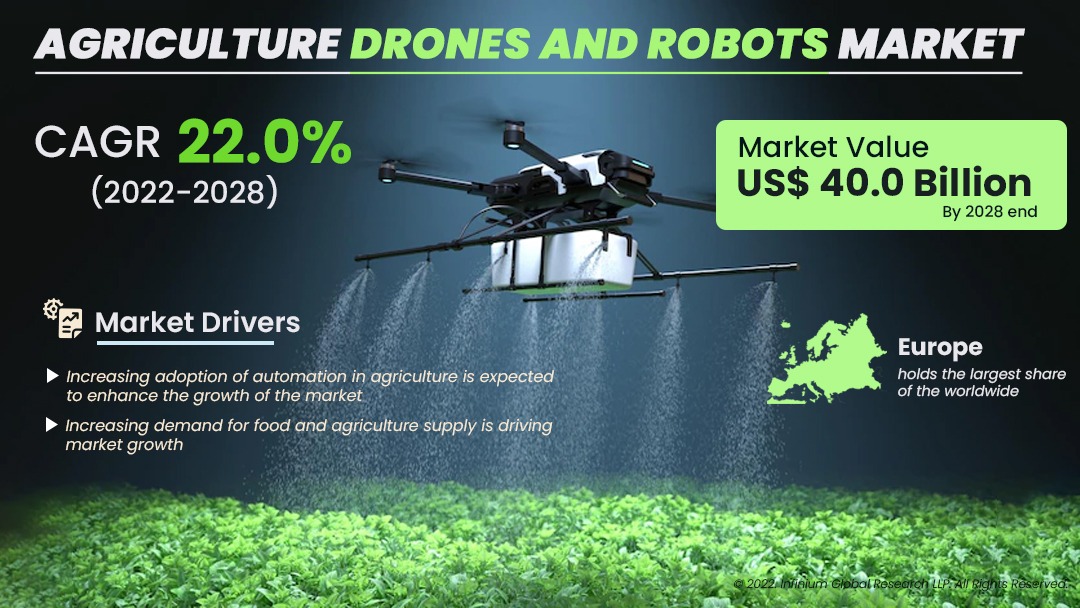 The report provides deep insights into demand forecasts, market trends, and micro and macro indicators. In addition, this report provides insights into the factors that are driving and restraining the growth in this market. Moreover, The IGR-Growth Matrix analysis given in the report brings insight into the investment areas that existing or new market players can consider. The report provides insights into the market using analytical tools such as Porter's five forces analysis and DRO analysis of the agriculture drones and robots market. Moreover, the study highlights current market trends and provides forecasts from 2022-2028. We also have highlighted future trends in the market that will affect the demand during the forecast period. Moreover, the competitive analysis given in each regional market brings insight into the market share of the leading players.