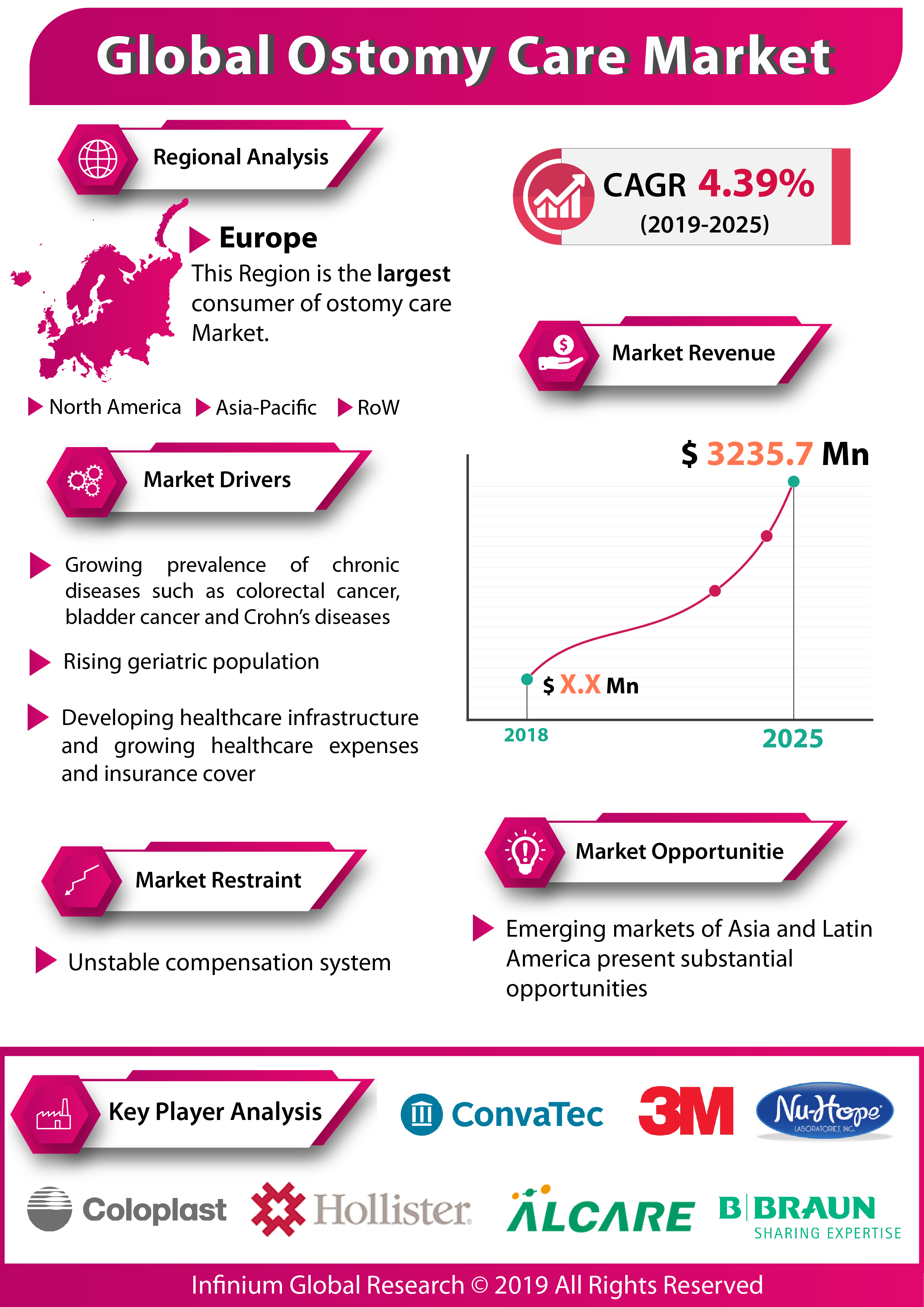 The Global Ostomy Care Market is expected to grow at a CAGR of 4.39% between 2019 and 2025 in terms of value. In the U.S., approximately 725,000 to 1million people have an ostomy and about 100,000 new ostomy procedures are performed each year. Furthermore, research suggests that typically ostomy patients are above 50 years. Therefore, increasing geriatric population coupled with increased prevalence of colorectal cancer, bladder cancer, and Crohn’s disease are the key market driving factors responsible for the growth of the ostomy care market. According to CCFA, approximately 1.6 million Americans have inflammatory bowel diseases and the number is anticipated to grow rapidly in the near future. In addition, favorable reimbursement policies in countries with well-established healthcare infrastructure are expected to contribute to the growth of the ostomy care market in the near future. On the other hand, discomfort and issues associated with using the ostomy bags are likely to hamper the growth of the ostomy care market. Moreover, emerging economies such as India, China, and Brazil have experienced a significant rise in the development of healthcare infrastructure in the recent past and this trend is projected to continue over the forecast period.

Among the regions, Europe dominates the ostomy care market and is anticipated to remain dominant over the forecast period. The highest reported prevalence of ulcerative colitis values and Crohn's disease were in Norway and Germany. In addition, the high prevalence of colorectal cancer and inflammatory bowel disease also propels the growth of the ostomy care market in Europe. In addition, the presence of several established players such as Coloplast and ConvaTec Inc. in Europe contribute to a significant share in the Europe ostomy care market. North America holds the second-largest share in the ostomy care market. Moreover, a significant market share is attributable to the U.S. owing to the well-established healthcare facilities, favorable reimbursement policies, as well as high spending capacity of the people in the U.S. Approximately 7, 00,000 people are living with a stoma, and in the U.S, more than 1 million people have had a stoma. However, Asia Pacific is anticipated to grow at the fastest rate owing to the developing healthcare infrastructure in this region.