Global Epilepsy Monitoring Device Market is expected to grow at a CAGR of 6.68% over the Forecast Period of 2020– 2026 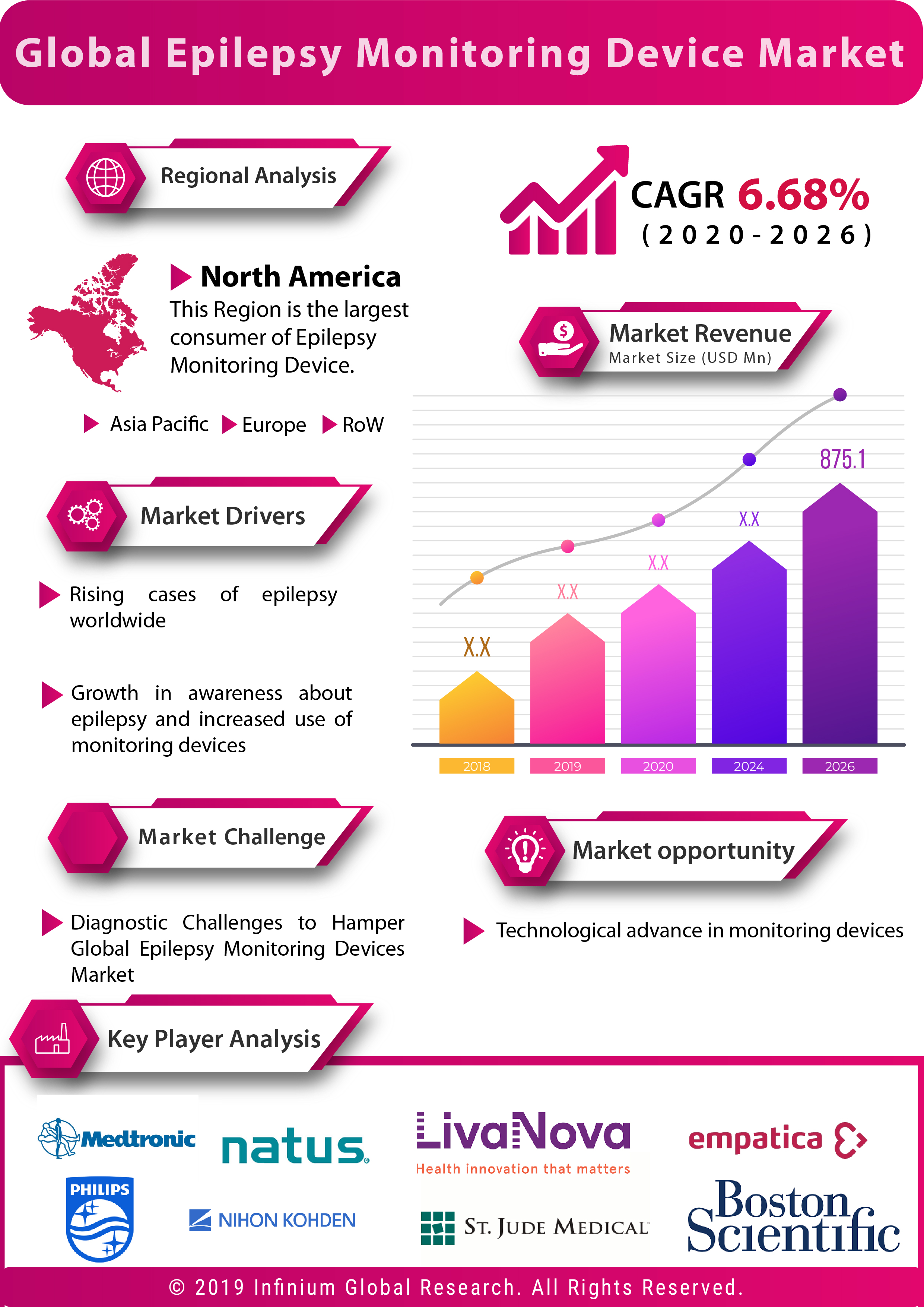 The Global Epilepsy Monitoring Device Market is expected to grow at a CAGR of 6.68% between 2020 and 2026 in terms of value. Epilepsy monitoring device is used to diagnose brain abnormities through different devices as real-time epilepsy monitoring and seizure detection have become important over the past decades. According to the centers for disease control and prevention, about 3.4 million Americans, including 470,000 children live with epilepsy. On the other hand, according to the National Health Institute, about 35 % don’t respond to medication to control seizures. Thereby, many devices have been launched in the last decades such as mHealth wearable, SmartWatch Inspyre™ for the Apple Watch. mHealth wearable is used for tracking epileptic seizures and alerts the care teams. This improves the safety of the patient. Epilepsy is one of the common neurological diseases worldwide. Rising cases of epilepsy worldwide is the major driving factor for the epilepsy monitoring device market. The number of patients suffering from epilepsy is approximately 50 million cases globally. Such a huge prevalence of the disease creates a major burden in seizure-related disability, stigma, mortality, comorbidities, and costs, which in turn increases the demand for epilepsy monitoring devices. Furthermore, growing awareness about epilepsy and increased use of monitoring devices are fueling the market growth. However, diagnostic challenges to hamper the global epilepsy monitoring devices market. Accurately diagnosing epilepsy is challenging because clinicians rarely have the opportunity to observe seizures and there are many types of seizures and epilepsy syndromes with differing appearances. Moreover, technological advancements in monitoring devices are providing growth opportunities to the market players. Improved visualization of seizures through digital cameras with video capabilities and video monitoring in-home settings maybe particularly beneficial for individuals with infrequent seizures or with more than one type of seizure.

Geographically, the global epilepsy monitoring device market is classified into North America, Asia- Pacific, Europe, and the Rest of the World. North America holds the highest market share in this market due to the availability of advanced healthcare facilities as well as the presence of well-established healthcare infrastructure. In addition, the average incidence of epilepsy each year in the U.S is estimated at 150,000 or 48 for every 100,000 people. Thereby, the growing prevalence of epilepsy in the U.S can be another factor propelling the growth of this market in this region. On the other hand, Asia Pacific is the fastest-growing region in this market due to the presence of a large population with prevalence.