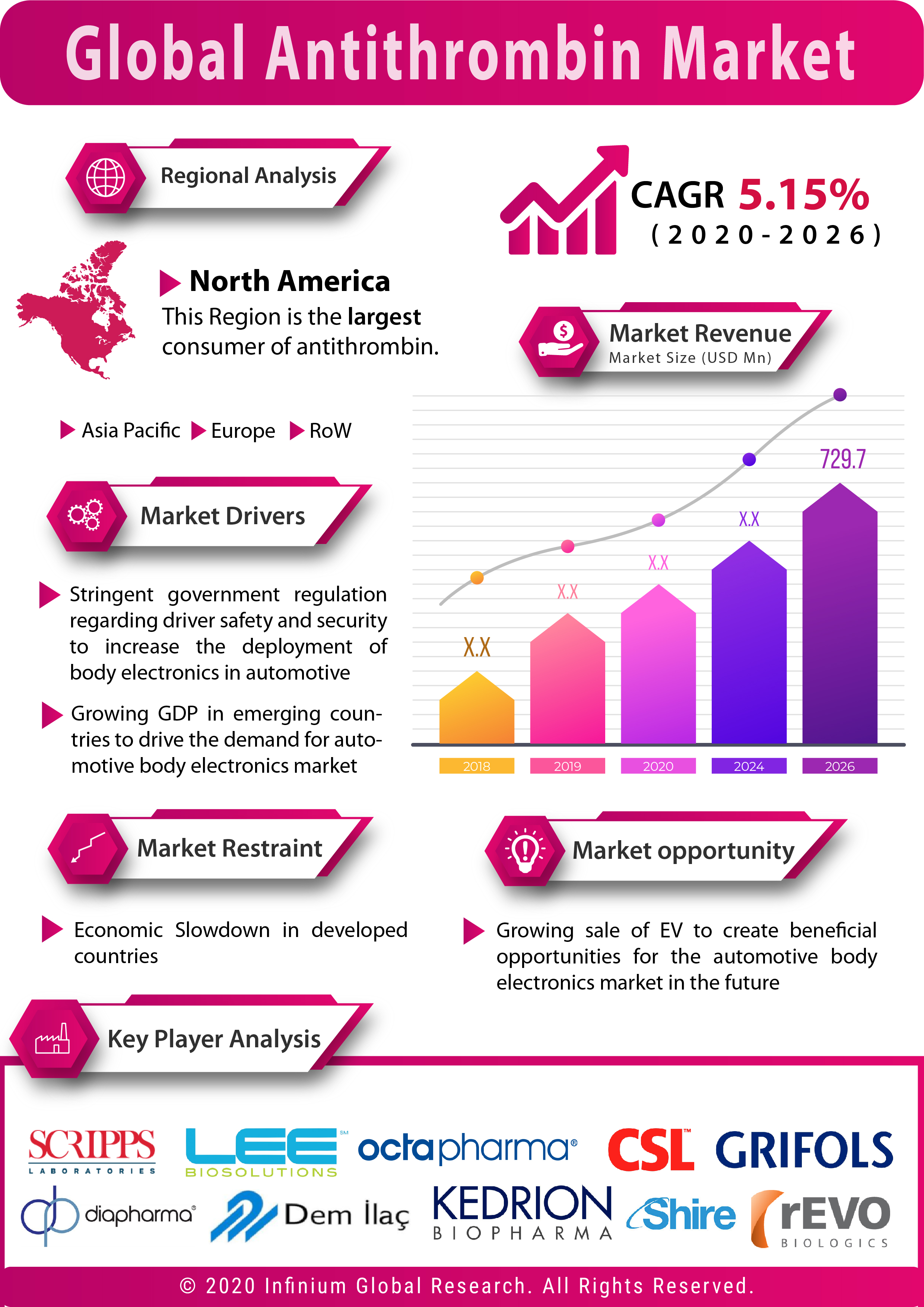 The Global Antithrombin Market is expected to grow at a CAGR of 5.15% between 2020 and 2026 in terms of value. The increasing incidences of hereditary and acquired antithrombin deficiency are majorly influencing the growth of the antithrombin market. Hereditary antithrombin deficiency is a thrombogenic disorder associated with a 50–90% lifetime risk of venous thromboembolism. Antithrombin has been increasingly used for the treatment and diagnosis of hereditary and acquired hereditary antithrombin deficiency, which increases its demand as the prevalence increases along with the rising population. Moreover, the growing usage of antithrombin-based anticoagulants is anticipated to drive the demand for antithrombin in the pharmaceutical sector. The thrombotic complications of atherosclerosis, such as acute coronary syndrome and ischemic stroke are believed to be fatal. The clopidogrel has played an important role in boosting the antithrombotic market over the past few years. Over the past two decades, pharmaceutical companies have taken efforts to develop antithrombotics that function by inhibiting key enzymes positioned at higher levels of the coagulation system, further propelling the market.

However, the high cost of antithrombin based therapies is expected to hamper the growth of the market. Antithrombin is a more expensive treatment to use compared with the other therapies as FFP, which is leading to a shift of preference towards substitute therapies. Nevertheless, the development of novel recombinant Antithrombin is anticipated to provide new opportunities for the antithrombin manufacturers. Plasma-derived antithrombin (AT) concentrates have been used for the management of hereditary and acquired deficiencies since the early 1980s. Recombinant versions of other blood factors and their derivatives are increasingly becoming available, providing a safe and abundant supply of these important therapeutics. Moreover, engineered antithrombin will also gain clinical significance as it helps to prevent various perioperative and peripartum thromboembolic blood clots. Hence, the development of such novel recombinant Antithrombin is expected to create new opportunities for the antithrombin manufacturers over the forecast period.