The casket and coffin market is expected to grow with a healthy CAGR during the forecast period. A casket is a specially intended box made to contain a deceased person’s body. It is typically utilized during a funeral service for viewing the body. Then, if the family has not chosen a cremation burial, the casket containing the body is lowered into the ground during the burial ceremony. However, a coffin is also a particularly designed box that holds a deceased person’s body for a funeral service. Like a casket, it may also be utilized for viewing and burial. In most countries outside the United States, people use the term ‘coffin’ when they want to describe the ceremonial box that is utilized to hold a loved one’s body during the funeral and burial.

Many people are coming up with start-ups to enter the casket and coffin market. The start-ups have tie-ups with hospitals, cemeteries, and crematoriums, and provide hassle-free services. Furthermore, the offering of a complete package in the form of a burial casket and coffin is likely to be preferred by consumers during the forecast period. However, the only threat to the industry is the increasing popularity of cremation owing to its eco-friendlier nature compared to burial. Cremations accounted for 50.2% of funerals in the year 2016, up from 48.5% in the year 2015 in the United States. The casket and coffin industry is being forced to meet the changing desires of the customer while numerous people also are increasingly preplanning their funeral arrangements since the epidemic began. Few global players who operate in this market and new players entering the market have enormous scope during the projection period. 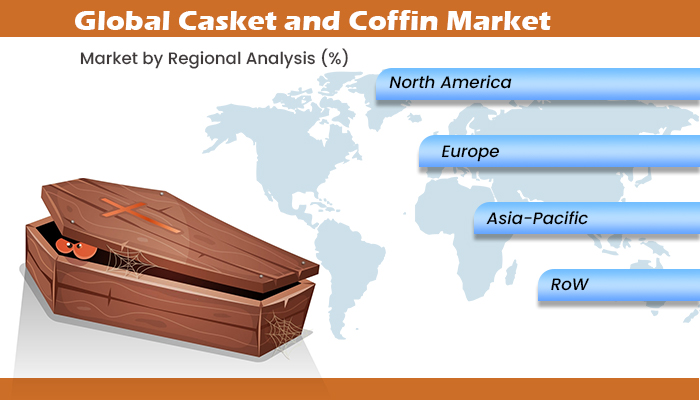 The report provides deep insights into the demand forecasts, market trends, and micro and macro indicators. In addition, this report provides insights into the factors that are driving and restraining the growth in this market. Moreover, The IGR-Growth Matrix analysis given in the report brings an insight into the investment areas that existing or new market players can consider. The report provides insights into the market using analytical tools such as Porter's five forces analysis and DRO analysis of the casket and coffin market. Moreover, the study highlights current market trends and provides forecast from 2021-2027. We also have highlighted future trends in the market that will affect the demand during the forecast period. Moreover, the competitive analysis given in each regional market brings an insight into the market share of the leading players.