China is expected to be the largest vegan chocolate confectionery market in the BRICS region. China has one of the largest vegan chocolate confectionery industries in the BRICS countries which is majorly dominated by foreign companies. Foreign players such as Mars Incorporated, Mondelez International, and The Hershey’s Company offer their lineup of vegan chocolate confectionery products in China. Vegan confectionery products are rapidly gaining popularity in China as the vegan population is growing steadily in the country. Also, the growing awareness about the environment has increased the demand for plant-based food products in China. These two factors particularly have boosted the growth of the market in China. Other factors such as high per capita income among BRICS countries, large chains of hypermarkets, supermarkets, retail stores, chocolate stores, and shops have also aided the growth of the market in China. India is expected to be the second-largest region in the market. There are many local players who have started offering vegan chocolate at the local level and only this factor itself cemented the strong foundation of the market in India. 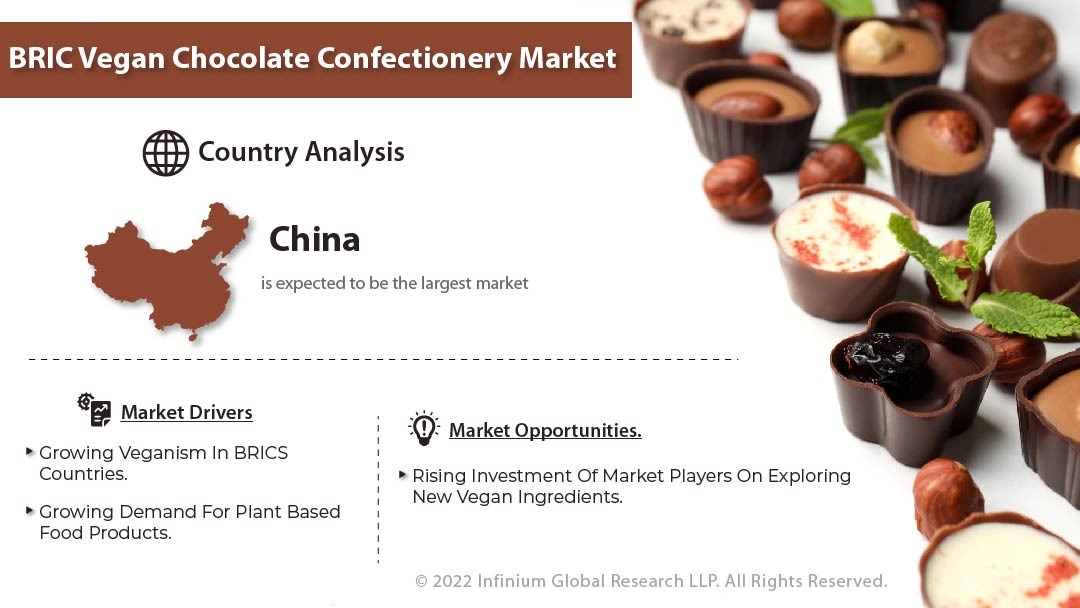 The report provides deep insights into the demand forecasts, market trends, and micro and macro indicators. In addition, this report provides insights into the factors that are driving and restraining the growth in this market. Moreover, The IGR-Growth Matrix analysis given in the report brings an insight into the investment areas that existing or new market players can consider. The report provides insights into the market using analytical tools such as Porter's five forces analysis and DRO analysis of BRICS vegan chocolate confectionery market. Moreover, the study highlights current market trends and provides forecast from 2021-2027. We also have highlighted future trends in the market that will affect the demand during the forecast period. Moreover, the competitive analysis given in each regional market brings an insight into the market share of the leading players.