A battlefield management system (BMS) is used to surge command and controller of a military unit. It works by integrating information acquired from real-time data on the battlefield and processing the data. Hence, the battlefield management system becomes a significant element of the army’s network-centric warfare program and incorporates information about groups on the battlefield to the command headquarters. Furthermore, a BMS permits soldiers on the battleground to admittance real-time data for better decision-making during difficult times. For this purpose, BMS obtain and transfer data, images, and voice from numerous sources, including cameras, laser range-finders, radar, and ground sensors. Moreover, geographical information systems, multisensory data fusion systems, rugged computing devices, and a software-defined radio-based communication system for soldiers are some of the technologies that are included in each BMS. 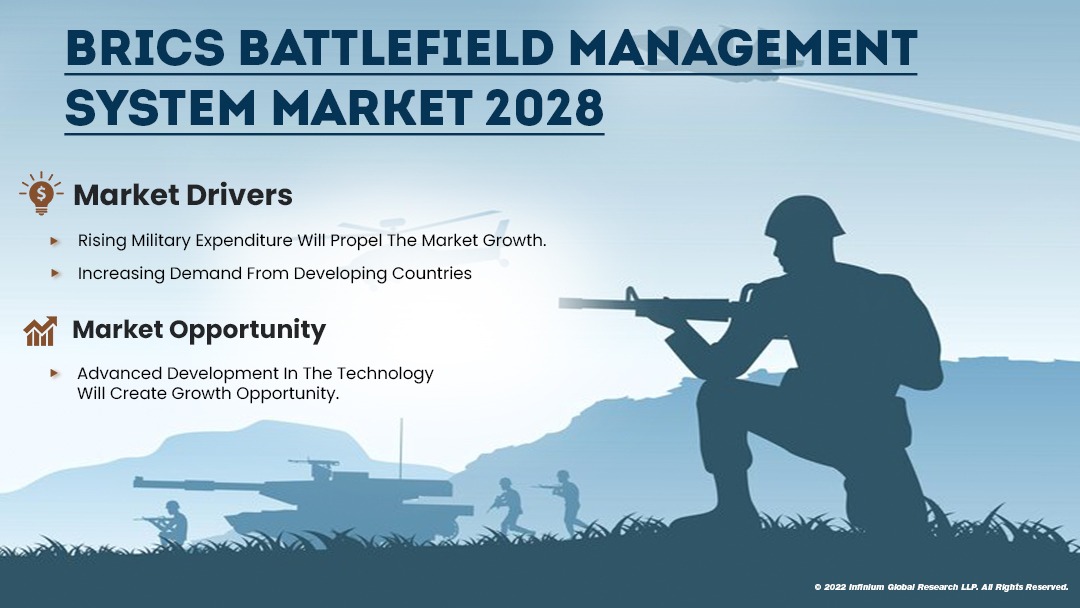 The rising military expenditure in BRICS nations is expected to propel the growth of the BRICS battlefield management system market over the forecast period. The counties in the BRICS nations continue raising their spending on the army, navy, and air force. For instance, in 2018, China recorded a straight 11-year increase in its annual military expenditure, and during the year, the country’s annual military spending accounted for 49% of the total defense expenditure in the overall region. Furthermore, the countries in the BRICS nations are conducting joint operations to develop communications between the army, navy, and air force. The demand for battlefield management systems in such countries is rising to establish such joint operations, propelling the market’s growth. For instance, in 2019, India conducted a joint operational policy to develop the much-required synergy between the army, navy, and air force. The doctrine is envisioned in that operation to establish a broad framework of concepts and principles for joint planning and execution of operations across all the warfare domains. Other nations in the BRICS region deploy similar initiatives to maintain territorial integrity and preserve national sovereignty. Moreover, the countries like India and China are currently facing many geopolitical tensions with increased defense-related expenditure. In such cases, there is a need for enhanced situational awareness to support the decision-making process. Such understanding is provided by the battlefield management system, which can significantly contribute to the growth of the region’s market. However, the lack of proper deployment and high cost involved in implementing the battlefield management system is hampering the development of the battlefield management system market over the forecast period. Nevertheless, an increase in the need to protect nations from rapidly growing terrorist activities requires strengthening military forces, thus, surging the integration of battlefield management systems in the military, which is anticipated to provide ample growth opportunities to the market.

The COVID-19 pandemic harmed the BRICS battlefield management system market by directly affecting production and demand, creating supply chain and market disruption, and its financial impact on firms and financial markets. The need for battlefield management systems decreased as the overall defense-related budget allocations dropped in the BRICS nations. Furthermore, the key players in the market have faced reductions in revenues due to late delivery, manufacturing shutdown, and limited equipment availability due to market growth. In addition, the BRICS nations’ market had a negative impact since the COVID-19 pandemic disturbs defense activities such as conferences, joint exercises, drills, regular training, and recruitments, which directly affects the growth of the battlefield management system market.

Geographically, China is expected to bolster market prospects during the forecast period. The strengthening of the strategic military alliances between the United States and China has resulted in heavy demand for rapid modernization of defense capabilities of regional countries, such as China, to safeguard their vested interests. To effectively respond to security threats and accomplish urgent, critical, and dangerous strategic missions, several weapon modernization programs are currently underway to ensure the combat readiness of existing systems. Hence, China’s demand for a battlefield management system rises to respond to security threats effectively and accomplish urgent, critical, and dangerous strategic missions. Furthermore, China has also raised its military expenditure, which can effectively contribute to the market’s growth. For instance, in 2018, China recorded a straight 11-year increase in its annual military spending, and during the year, the country’s annual military expenditure accounted for 49% of the total defense expenditure in the overall region. Additionally, China is adopting many modernization programs, which have resulted in several contracts for integrating advanced battlefield management systems.

The report provides deep insights into the demand forecasts, market trends, and micro and macro indicators. In addition, this report provides insights into the factors that are driving and restraining the growth in this market. Moreover, The IGR-Growth Matrix analysis given in the report brings an insight into the investment areas that existing or new market players can consider. The report provides insights into the market using analytical tools such as Porter's five forces analysis and DRO analysis of the battlefield management system market. Moreover, the study highlights current market trends and provides forecast from 2022-2028. We also have highlighted future trends in the market that will affect the demand during the forecast period. Moreover, the competitive analysis given in each regional market brings an insight into the market share of the leading players.