Fungi are freely present in the environment, a versatile group of microorganisms, and can be part of the normal flora of humans and animals. Fungi can cause mild superficial infections to serve life-threatening invasive conditions. The diseases where fungi have invaded the deep tissues and have established themselves, resulting in prolonged illness, are known as invasive fungal infections (IFI’s). Furthermore, in debilitated and immunosuppressed individuals, the IFI’s can be seen usually, and many reports have shown that even in immunocompetent individuals. Hence IFI’s becomes a potential threat in the present century. Furthermore, fungi have evolved mechanisms to survive in the mammalian hosts, which are considered saprophytic microorganisms. Most of the time, fungal infections spread accidentally, and systemic fungal infections spread rarely but can result in high mortality. In the case of systematic fungal infections, the outcome of the disease depends more on the host factors than the fungal virulence. Moreover, fungi invading often goes unrecognized by the immune system, and such invasive fungal infections can result in severe inflammatory reactions resulting in morbidity and mortality. Additionally, fungi were uncommon during the earlier part of the 20th century when the world was plagued with bacterial epidemics, but now fungi have become a major global health problem.

There are many discoveries and advancements in pipeline drugs and facilities provided by hospitals in intensive care units for those who have undergone surgery. Furthermore, there is a rise in the population suffering from HIV, for which there is increased use of broad-spectrum antibiotics. Moreover, dramatic growth in the global economy has been seen in the last few years. All these factors are expected to accelerate the development of the invasive fungal infection market. Also, there has been seen an increasing advancement in pipeline drugs used to treat fungal infection; hence, this advancement is projected to drive the market’s growth. On the other hand, there are many consequences that patients might have to face during immunosuppressive treatment of fungal infection, and due to which the growth of the invasive fungal infection market can be hampered. Nevertheless, the rising disposable income of people has been seen in the past few years. Hence, people can spend more on their treatment, which is an excellent opportunity for the invasive fungal infection market. 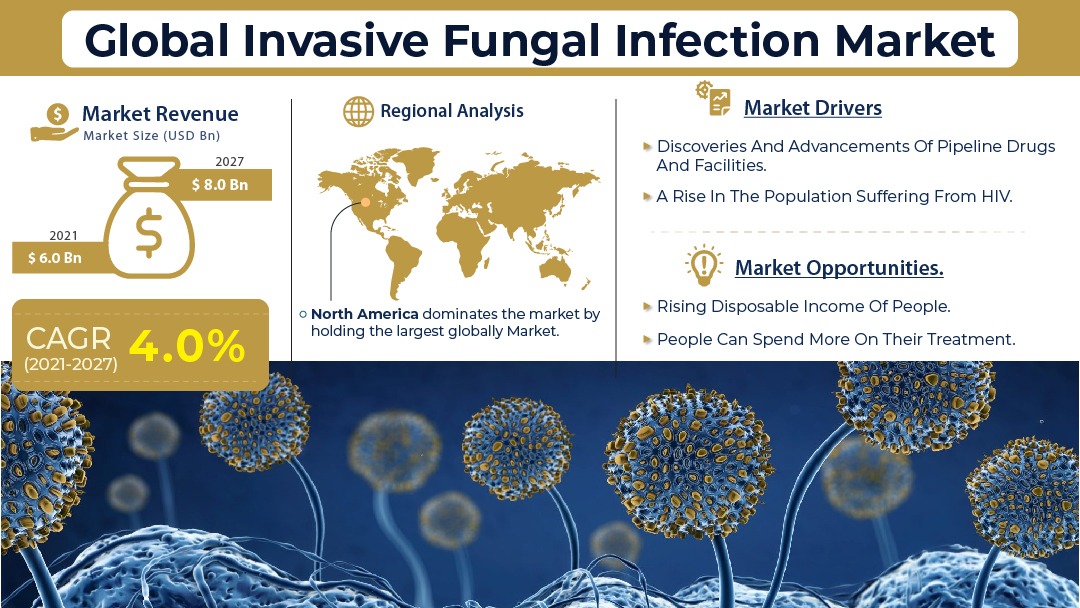 The report on the global invasive fungal infection market covers segments such as disease type, and drug type. On the basis of disease type, the sub-markets include candidaemi Caa and invasive candiasis, intra-abdominal candiasis, cryptococcal meningitis, esophageal candidiasis, histoplasmosis acute pulmonary, invasive aspergillosis, invasive rhinosinusitis, mucormycosis, and others. On the basis of drug type, the sub-markets include polyenes, amphotericin b deoxycholate, lipid formulation amphotericin b, and others.

The report provides deep insights into the demand forecasts, market trends, and micro and macro indicators. In addition, this report provides insights into the factors that are driving and restraining the growth in this market. Moreover, The IGR-Growth Matrix analysis given in the report brings an insight into the investment areas that existing or new market players can consider. The report provides insights into the market using analytical tools such as Porter's five forces analysis and DRO analysis of the invasive fungal infection market. Moreover, the study highlights current market trends and provides forecast from 2021-2027. We also have highlighted future trends in the market that will affect the demand during the forecast period. Moreover, the competitive analysis given in each regional market brings an insight into the market share of the leading players.