Veganism is growing rapidly around the world. According to The Vegan Society, the people signing up for the Vegan Campaign in 2022 were 629,000 from around 228 countries as compared to 582,000 people that signed for the campaign in 2020 and 250,000 in 2019. As per this campaign, the people signing up have to only consume vegan products for the month of January. People are embracing veganism with open arms and many people are transitioning from vegetarian to veganism due to global movements such as Veganuary. The growing veganism is expected to boost the sales of vegan chocolate confectionery products. Furthermore, the growing demand for plant based food products due to the growing number of lactose-intolerant people with rising environmental awareness among consumers is propelling the growth of the market. The high prices of vegan chocolate confectionery as compared to conventional confectionery may restrain the market in some aspects. Nevertheless, new opportunities will occur in the market as market players are focusing on exploring new vegan ingredients.

North America is expected to dominate the vegan chocolate confectionery market as North America has one of the largest vegan populations in the world. According to Plant Proteins Co., 6% of the US consumers are vegan which is a 500% increase from 2014. These statistics indicated that veganism is growing rapidly in the United States. The huge vegan population in the United States alone indicates the expanse of veganism in overall North America. Furthermore, a high concentration of market players such as Mars Incorporated, Hu Master Holdings, LLC, Alter Eco, and others is also responsible for the strong growth of the market in the North American region. These market players offer a wide range of vegan chocolate confectionery products in the region. Furthermore, Europe is expected to be the second largest region in the market owing to the growing vegan population in countries such as the United Kingdom. 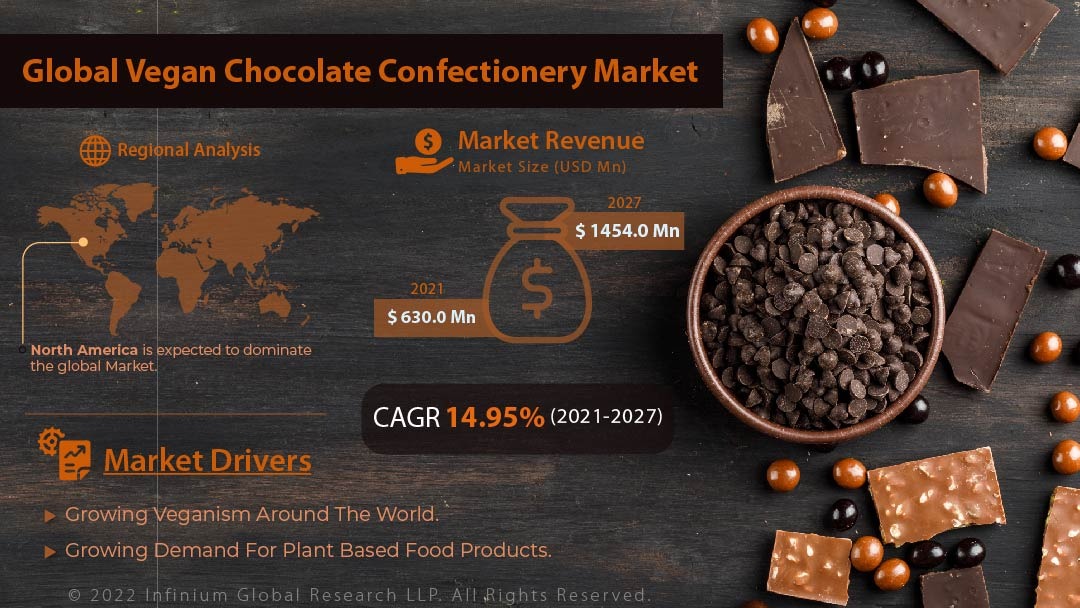 The report provides deep insights into the demand forecasts, market trends, and micro and macro indicators. In addition, this report provides insights into the factors that are driving and restraining the growth in this market. Moreover, The IGR-Growth Matrix analysis given in the report brings an insight into the investment areas that existing or new market players can consider. The report provides insights into the market using analytical tools such as Porter's five forces analysis and DRO analysis of the vegan chocolate confectionery market. Moreover, the study highlights current market trends and provides forecast from 2021-2027. We also have highlighted future trends in the market that will affect the demand during the forecast period. Moreover, the competitive analysis given in each regional market brings an insight into the market share of the leading players.