Coeliac disease, or gluten-sensitive enteropathy, is a chronic autoimmune disorder affecting approximately one percent of the population. Beer is often excluded from the diet of coeliac disease sufferers because it is traditionally brewed from grains such as barley and wheat, which contain gluten in their storage proteins. The gluten content of a finished beer is influenced not only by the raw materials but also by the malting and brewing procedures used to produce it. There has been a significant increase in breweries in the U.S. over the last few years. Moreover, craft beers have experienced a substantial rise over the past few years. Although the global beer market has experienced sluggish growth, gluten free beers have experienced significant growth over the past few years. One of the leading gluten free beer companies, New Planet Beer Company, has experienced growth over the past few years and has launched new products in the U.S.

Due to the lockdown and the need for physical distancing, many companies have been forced to shut down; hence most small and large-scale businesses are affected. During the pandemic, the gluten free beer market saw a decline in its profit and market size. However, the market’s revenue is expected to recover in the coming years. In the coming years, most businesses are expected to revive their profit margin; hence the beer industry will see tremendous growth in its market size. Furthermore, awareness among the global population and the availability of gluten free beer will lead the market after the pandemic.

Globally, the gluten free beer market is expected to be driven by factors such as raising health concerns among the consumers, thereby increasing demand for gluten free products, new product launches and innovations by leading companies, and aggressive marketing by retailers about gluten free products. One of the primary challenges of the market is the lack of awareness among the consumers about gluten free beers, and the consumers are still apprehensive about the taste of gluten free beers; however, with companies and retailers aggressively marketing the gluten free products, the impact of such challenge is expected to be diminishing over the forecast period. Furthermore, Celiac disease is caused by the excessive consumption of gluten. This disease was initially only prevalent in Europe. People are growing aware of the disease and other health issues caused by gluten intake. Moreover, many switch to healthier diet habits and wish to stay away from gluten. Hence, these factors may contribute to the gluten free beer market growth. Additionally, the demand for gluten free food & beverage products is increasing around the globe, which generates ample growth opportunities for the market. 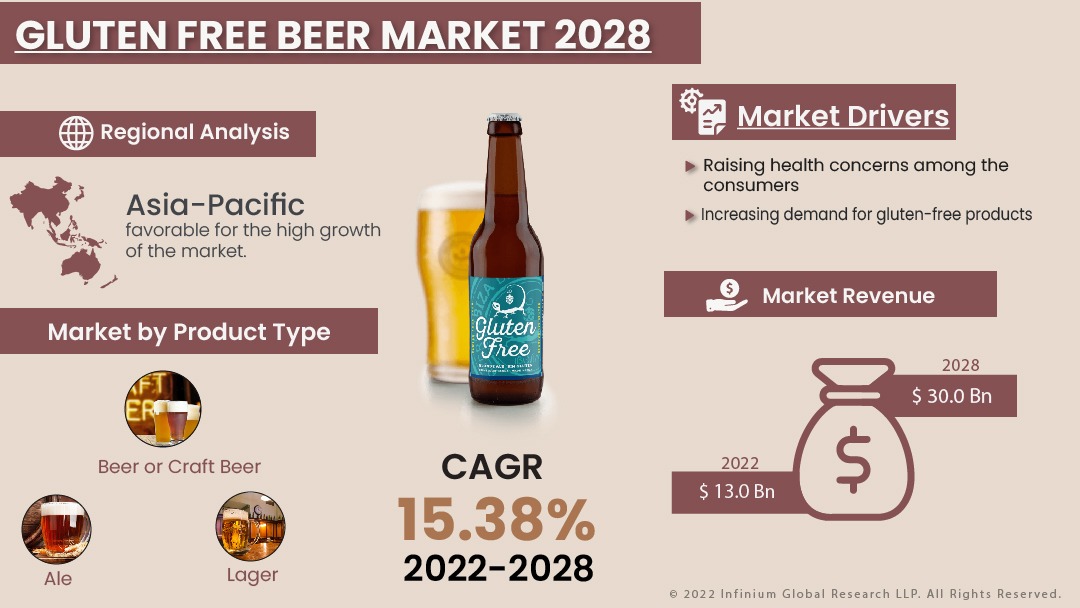 The report provides deep insights into the demand forecasts, market trends, and micro and macro indicators. In addition, this report provides insights into the factors that are driving and restraining the growth in this market. Moreover, The IGR-Growth Matrix analysis given in the report brings an insight into the investment areas that existing or new market players can consider. The report provides insights into the market using analytical tools such as Porter's five forces analysis and DRO analysis of gluten free beer market. Moreover, the study highlights current market trends and provides forecasts for 2022-2028. We also have highlighted future trends in the market that will affect the demand during the forecast period. Moreover, the competitive analysis given in each regional market brings an insight into the market share of the leading players.