Seaweed has been consumed by humans for over 1000 years. Seaweed is used in a range of foods and cuisines around the world. Traditionally, seaweed has been produced and mostly consumed in the costal areas of Asia-Pacific. There are approximately 221 species of seaweed used for commercial purposes. About 10 are cultivated extensively. Seaweed comes in different colors such as green. Brown and red and in different shapes and sizes such as delicate fingers, spheres, or broad leaves. Seaweed is cultivated in wild and through farmed seaweed. Costal communities have been majorly involved in the harvesting of sea weed primarily due to its simple technology, fast cultivation and low initial capital. Seaweed is primarily grown in costal parts of China, Malaysia, the Philippines and Indonesia and are heavily consumed in Japan, South Korea, and other South-East Asian countries.

The demand for commercial weed is growing rapidly among end user industries. Primarily, most of the commercial seaweed is used by the food and beverage industry. The use of hydrocolloids is growing in the food, animal additives and pharmaceutical industry. Seaweed is used as binders in the food for increasing the solidity and thickness of the food products. Seaweed also has high nutritional value and is used as an ingredient in several dietary supplements. Also, seaweed is used in cosmetic and personal care products and used as fertilizers due to the presence of potassium chloride (KCI) in them.  The consumption of plant-based foods is growing rapidly. It is majorly due to environmental and health benefits of the plant-based foods. The demand for plant-based proteins has been increasing rapidly, seaweed can be used as a plant based protein alternative. This has majorly attracted the customers who consume dairy free products. The only factor restraining the market is the complexities of supply chain. Nevertheless, new opportunities as expected to arise as new players are entering into market introducing newest production technologies. 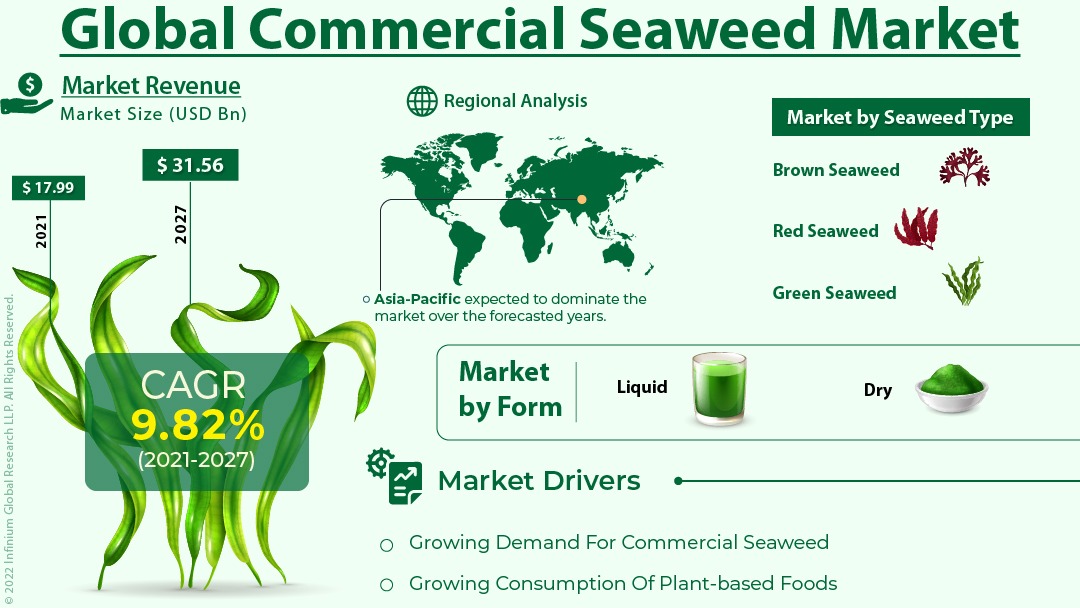 The report provides deep insights into the demand forecasts, market trends, and micro and macro indicators. In addition, this report provides insights into the factors that are driving and restraining the growth in this market. Moreover, The IGR-Growth Matrix analysis given in the report brings an insight into the investment areas that existing or new market players can consider. The report provides insights into the market using analytical tools such as Porter's five forces analysis and DRO analysis of commercial seaweed market. Moreover, the study highlights current market trends and provides forecast from 2021-2027. We also have highlighted future trends in the market that will affect the demand during the forecast period. Moreover, the competitive analysis given in each regional market brings an insight into the market share of the leading players.