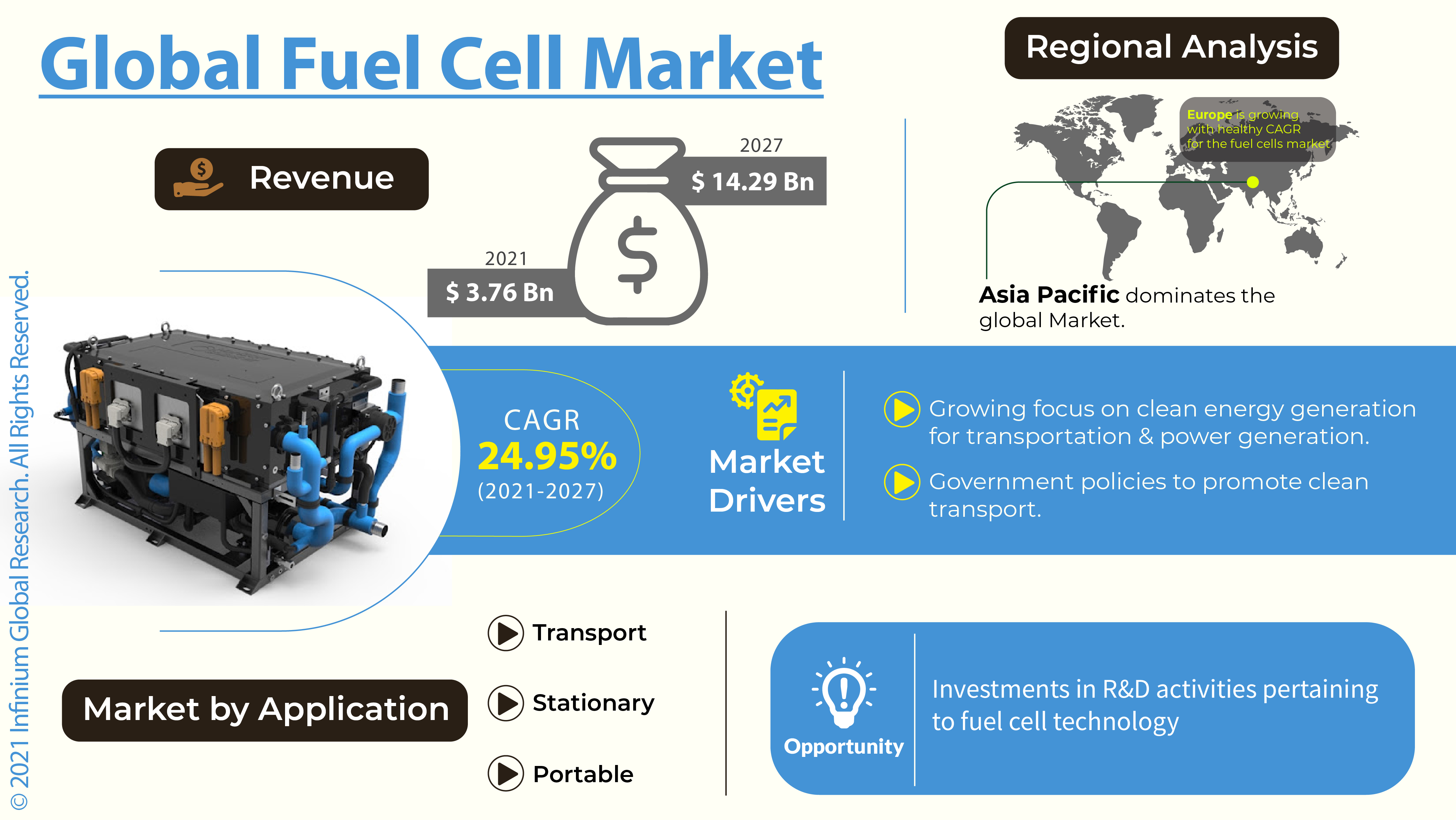 The global fuel cells market size is projected to reach USD 14.29 billion by 2027 from an estimated value of USD 3.76 billion in 2021, growing at a CAGR of 24.95% during the forecast period.Fuel cells are seen by many people as a key solution for the 21st century, enabling clean efficient production of power and heat from a range of primary energy sources. This technology is very interesting for many different applications including micro power generators, auxiliary power generators, stationary power generators, distributed power generators, and portable power generators for transportation, military projects, and the automotive market.

However, during pandemics as health workers are relentlessly trying to save lives, the role of fuel cells, mainly SOFCs, in meeting the need for extra energy in this challenging time is vital. As solid oxide fuel cells (SOFCs) can provide both on-grid and off-grid energy storage and can be interconnected to create larger systems capable of supplying energy in an emergency.

Highly polluting fossil fuels are a concern for environmental reasons. This has resulted in more attention being paid to fuel cells. Over the last few years, growth in shipments of fuel cells has accelerated rapidly as various applications have become commercial. Portable fuel cells saw the most rapid rate of growth over the period since increasing numbers of fuel cell educational kits were sold to consumers. As a result of the rapid urbanization, the global growth of fossil fuel energy consumption has increased, leading to an increase in environmental pollution rates. Consequently, environmental pollution has shifted attention to get clean energy conversion. Fuel cells are known as one of the cleanest energy conversion systems owing to their high energy-conversion efficiency, environmental safety, high energy density, and other outstanding features. Fuel cells have actually reached a partial commercialization phase due to many different initiatives being issued all over the world particularly in the USA, Japan, and Europe by the bigger car constructors and the governments. That initiative mainly focuses on the further development of the cells at many demonstrative applications. In Germany, Japan, and the UK, there began to be significant government funding devoted to developing fuel cell technology. Moreover, government policies to promote clean transport also helped drive the development of the fuel cell market for automotive applications. However, the high cost of the fuel cell is affecting the growth of the market.

The Asia Pacific holds the largest market share in the fuel cell market. Japan is the major market in the Asia-Pacific region followed by South Korea. Due to the large demand for combined heat and power systems in Japan and other countries, the market for fuel cells is growing in the Asia Pacific. In the coming years, markets in countries such as China, India, and Korea are likely to increase as technological capabilities, and government support in these countries are expected to increase. For instance, an ambitious partnership between the Korean government and Hyundai plans to replace Korean CNG buses with fuel cell. This is intended to build on Hyundai’s PEM technology and experience in manufacturing fuel cell vehicles, as well as stimulating the production of fuel cell system components within Korea. Moreover, Europe is growing with healthy CAGR for the fuel cells market owing to the regulatory scenario in the region and advancements in technology.

The report provides deep insights into the demand forecasts, market trends, and micro and macro indicators. In addition, this report provides insights into the factors that are driving and restraining the growth in this market. Moreover, The IGR-Growth Matrix analysis given in the report brings an insight into the investment areas that existing or new market players can consider. The report provides insights into the market using analytical tools such as Porter's five forces analysis and DRO analysis of fuel cell market. Moreover, the study highlights current market trends and provides forecast from 2021-2027. We also have highlighted future trends in the market that will affect the demand during the forecast period. Moreover, the competitive analysis given in each regional market brings an insight into the market share of the leading players.