The revenue generated by the market was about USD 940 million in 2022 and is expected to reach nearly USD 1500 million in 2028 and is expected to grow with a CAGR of over 8% over the forecast period 2022-2028. A folding bike is a bicycle designed to fold into a compact form for proper transportation and storage. The first advantage offered by folding bicycles is intermodality. Unlike conventional bicycles, folding can be combined much more easily with other means of transport. Currently, few cities already have adequate infrastructure to transport bicycles on public transport. Folding bikes have small wheels, a low frame, and adjustable handlebars. Most models are designed primarily for urban use. Also, these folding bikes can be conveniently transported through passenger car vehicles. From the early years of 1980 folding bikes are being used, and since then their popularity has only increased. In most major cities they can be found easily and among commuters have become a popular transportation mode. Practical is the one word in which folding bikes can be summed up. 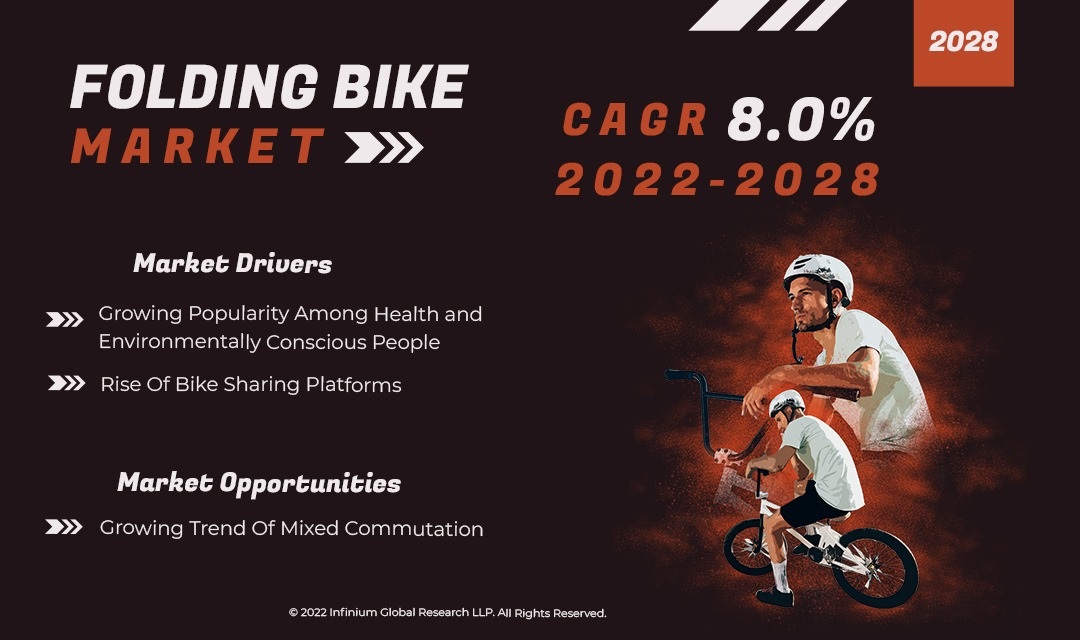 Increasing awareness about health and growing concerns about global pollution is the key factor driving the growth of the market. Moreover, the folding bikes can be taken anywhere as they are light in weight and the folding nature of these bikes helps to lower the space of the bikes while traveling to farther places as the space needed to carry is very less. They can be taken to the hilly regions for those of the riders who have the hobby of hiking and trailing. Folding Bikes are increasingly viewed as an exercise tool all across the globe, distinguishing their use even by wealthy consumers. Thus, folding bikes are gaining popularity among people who are shifting towards healthy and eco-friendly solutions. There has been a rise in Bike sharing and renting platforms such as BLOOM, Yulu, MoBike, and Evemo in major urban centers of the world which has also trended the demand for folding bikes among people. Moreover, challenges associated with design safety and performance limitation are likely to restrain the growth of the folding bikes market. Furthermore, government encouragement for the use of bicycles as a mode of daily travel is providing several growth opportunities for the folding bikes market. On the other hand, the increasing trend of the mixed mode of commutation among urban commuters will influence the folding bikes market positively over the upcoming years.

The global folding bikes market is segmented into North America, Asia Pacific, Europe, and RoW region. Europe dominated the folding bikes market in terms of revenue. EU has adopted stringent environmental policies which focus on lowering the carbon emissions from transportation. These policies of the EU have been detrimental to the people shifting toward greener and eco-friendly personal transportation such as bicycles. People are adopting folding bikes as they are eco-friendly and are easy to transport and require less space can be parked in minimum space. Also, countries such as The Netherlands are one of the largest users and producers of bicycles. Therefore, the demand for folding bikes is higher in such countries in Europe. Also, folding bikes can be found easily in the major cities of Europe such as London, Paris, Berlin, Rome, and others. Also, there has been a rise in bike-sharing and renting platforms which have further proliferated the use of foldable bicycles in Europe.

The report provides deep insights into the demand forecasts, market trends, and micro and macro indicators. In addition, this report provides insights into the factors that are driving and restraining the growth in this market. Moreover, The IGR-Growth Matrix analysis given in the report brings an insight into the investment areas that existing or new market players can consider. The report provides insights into the market using analytical tools such as Porter's five forces analysis and DRO analysis of the folding bikes market. Moreover, the study highlights current market trends and provides forecast from 2022-2028. We also have highlighted future trends in the market that will affect the demand during the forecast period. Moreover, the competitive analysis given in each regional market brings an insight into the market share of the leading players.