The landing gear is one of the most visible systems on aircraft. Aircraft landing gear consists of wheels equipped with simple shock absorbers, or more advanced air/oil oleo struts, for runway and rough terrain landing. An important role of the landing gear system is to absorb aircraft load during the landing and provide a suspension system while take-off and landing. It needs to be retractable to provide acceptable aerodynamic loading also carries the primary braking system as well to provide an all wheels on the ground steering system.

Geographically, North America region dominates by the largest market share in the commercial aircraft landing gear market due to the presence of multiple airports and demand for the production of lightweight aircraft. The U.S is accounted for the largest market share followed by Canada and Mexico. Moreover, the Asia Pacific region expected to boost the growth of the commercial aircraft landing gear market in the forecast period due to the low cost for commercial carriers and growing demand in the tourism sector. In Asia-Pacific, China holds the highest share followed by Japan and India. 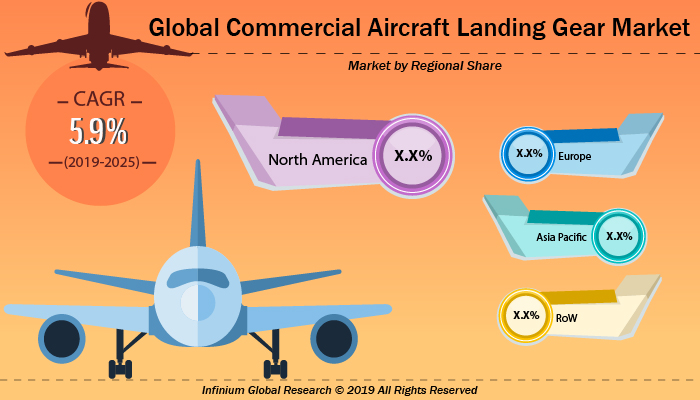 The report provides deep insights into the demand forecasts, market trends, and micro and macro indicators. In addition, this report provides insights into the factors that are driving and restraining the growth in this market. Moreover, The IGR-Growth Matrix analysis given in the report brings an insight into the investment areas that existing or new market players can consider. The report provides insights into the market using analytical tools such as Porter's five forces analysis and DRO analysis of commercial aircraft landing gear market. Moreover, the study highlights current market trends and provides forecast from 2019-2025. We also have highlighted future trends in the market that will affect the demand during the forecast period. Moreover, the competitive analysis given in each regional market brings an insight into the market share of the leading players.